Santa Fe Springs, CA... TASCAM is pleased to announce the arrival of the Version 2.0 upgrade for the VS-R264 / VS-R265 Video over IP Streamers / Recorders. Hot on the heels of the recently announced V1.1.0 update that allows three simultaneous RTMP format streams, the V2.0 upgrade offers a wealth of new capabilities, including upgraded ability to record to internal storage, support for the MP4 recording file format, an expansion in the maximum capacity of files recorded to external storage, and more.

With V2.0, users will appreciate that 17GB of internal storage is now available for recording, with the maximum file size having been increased to 17GB. For many applications, this increased capacity eliminates the need for external storage using an SD Card or USB Drive. Equally noteworthy, the maximum capacity of files recorded to external storage has been expanded from 2GB to 4GB per file. The V2.0 update also has a ‘Limit Maximum File Size’ setting that enables recordings to be made with more manageable and specified file size limitations to better address the user's requirements. Under such conditions, a new recording is automatically started once the previous file size limitation has been met, and each file is date and time stamped. 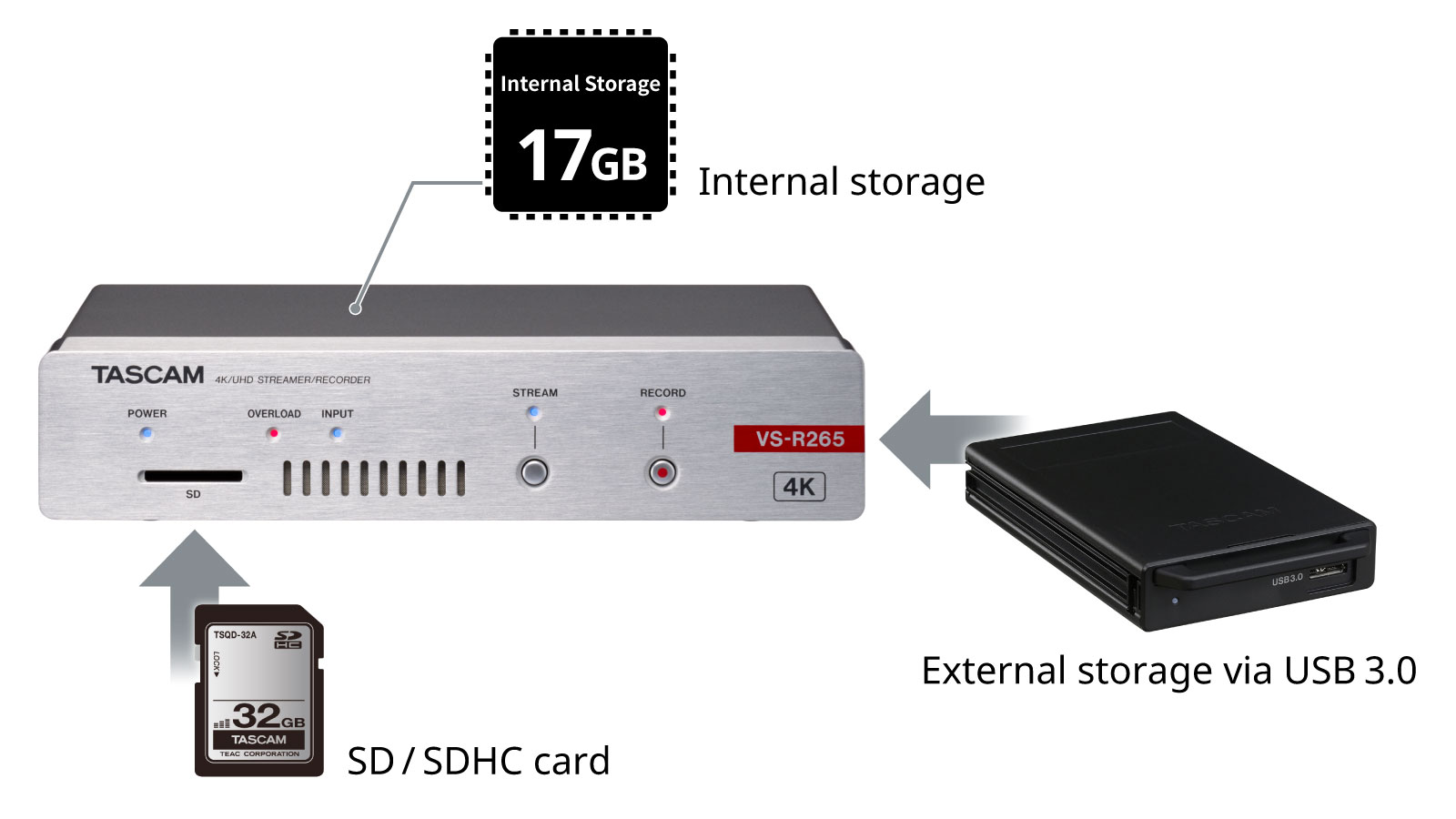 The V2.0 update now provides support for continuous recording regardless of storage capacity. This new function, identified by the ‘Delete Oldest File when Storage is Full’ setting, enables old files to be automatically deleted when storage reaches maximum capacity. This new function ensures that space for new recordings is always made available while also facilitating continuous recording modes. This capability could be especially useful, for example, in situations where a church might record and stream one or two services each day. In this case, no ‘housekeeping’ of the storage media would be required. Further, as recorded files are completed, they can be automatically uploaded via FTP to storage on a central FTP server while the recording of a new file continues—thus ensuring uninterrupted operation.

VS-R Series users will also appreciate the fact that V2.0 now supports the MP4 file format in addition to TS (Transport Stream). MP4 is a very popular audio/video streaming format, as it can also be used to store other data such as subtitles and still images. Now, users can choose between TS files, which are playable even if recording is interrupted by a power outage or some other unforeseen situation, or the more versatile MP4 format.

As part of the V2.0 update, several new options for the H.265 codec settings have been added. H.265, also known as HEVC (High-Efficiency Video Coding), is a successor to H.264. It is the newest video compression standard that is said to double the data compression proportion as compared to H.264 with the same video quality. H.265 selections include Quality/Latency: High/Normal/Low/Lowest. Additionally, V2.0 provides support for RTMP (Real-Time Messaging Protocol). RTMP 1/2/3 can now be controlled simultaneously by turning the STREAM button on or off. RTMP is a useful communications protocol intended to carry parallel streams of video, audio, and data messages, with associated timing information, between a pair of communicating peers.

Users will also appreciate the V2.0 streaming dashboard / web GUI, known as the TASCAM Discovery App and Web-GUI. Available for both Mac and Windows, TASCAM Discovery enables multiple VS-R units connected to the network to be managed from a simple Web-browser based GUI. All configuration settings are saved within the VS-R devices, so that in normal operation, no computer is required for streaming or recording thereafter until settings need to be changed. The V2.0 web GUI also provides better visibility of the status of each of the streaming outputs (up to 8 simultaneous streams) and also of the recording function, in one view.

In addition to the primary enhancements made available as part of the V2.0 update, numerous additional ‘fine-tunings6rd’ have been implemented. These include improved video and audio streaming output using the RTSP protocol, improved AV SYNC performance, stabilized frame information for encoded video data, and improved color space support for encoding. Previously, the disconnecting or connecting of LAN cables when the IP address was set to ‘Static’ would prevent the IP address from being determined. This has been corrected. Additionally, the adaptive bitrate streaming format HLS is now identified by its more common term HTP PULL and the REST API has been updated to Version 2.

The VS-R Series V2.0 update is slated to become available August 26. To get the update, visit the URL below.