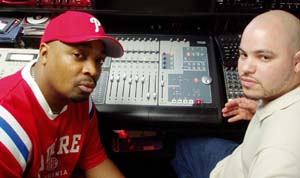 "When you're reaching for the stars you should dig in the dirt, too," says Chuck D. of Public Enemy. "Every bit of dirt and grain, man. Be as honest as you can in recreating those sounds. Sometimes you gotta reach back into the old analog world to sound authentic in the digital age. That's what we do with our FW-1884 and old Portastudio - we dig into the dirt."

No poet or band knows more about digging in the dirt to fight the power than Chuck D. and Public Enemy. Born on the asphalt diamonds of Long Island at the flashpoint of rap and hip-hop, Spectrum City - their original name - needed just one break in 1983 to be heard loud and clear ever since. When Chuck, a graphic arts major at Adelphi University, interviewed Run-DMC live on the school's legendary WBAU radio station and Jam Master Jay aired their demo tape, "Public Enemy #1" was born and here for good.

"If it wasn't for Jay really pushing that demo, P.E. wouldn't exist as it is today," says DJ Johnny "Juice" Rosado. "Chuck has that great, booming radio voice from all the shows he did at BAU. He is a very complex and versatile individual who fits none of the pigeonholes people try to put him in. It all comes across in his words and music."

Juice Back In The Fold
No one works closer with Chuck these days than Johnny Juice. Public Enemy fans hear Chuck D., recognize Flavor Flav, appreciate the band's martial arts and Fruits of Islam values and dig Johnny's beats, but few know the latter - not Terminator X - as the original studio DJ in Public Enemy. He left in late 1988 then returned to the fold with 1998's He Got Game soundtrack after some management changes, but Yo! Bum Rush The Show? And It Takes A Nation of Millions To Hold Us Back? Yep, that's Juice, too, and a more modest, unsung hip-hop hero you'll not find west of the Patterson Projects.

"I'm no hero, but I am one of the unknowns," admits Rosado. Working with Chuck D. in a two-story house in Roosevelt, Long Island, networked with six computers, he's using TASCAM's FW-1884 today to prep some beats for Public Enemy's upcoming big show at the legendary SOB Club in New York City with KRS-One, Kurtis Blow, and Big Daddy Kane.

"Hip-hop, like any other music, has its share of unknowns. For instance, everyone knows who Eric B. & Rakim were but few people know it was Rakim who did all the music, rapping, scratching, and mixing for that group, everything. He is the greatest rapper that ever lived yet one knows that! When people find that out, though, it's even more telling of what a God he was on the mic. So you do something and no one knows you did it, but when they find out they might dig that about you."

It turns out Johnny's hiatus from Public Enemy was a good one. He learned more in that time about melting rap, hip-hop, metal, and rock together in a studio than the Navy enlistment brochure ever promised when he joined in 1988. His six years in the Navy at various locations, including a secretive California sub base, is classified information but the good recording, mixing, producing, and scratching techniques he developed there recording bands during furloughs is of public record. His world-class martial arts training and championships, a degree in electrical engineering, and a chance meeting with Chuck D. after his discharge in 1994 were all it took to hook Juice up again with The Voice. 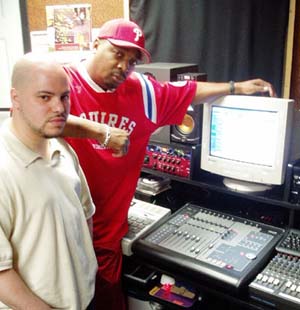 "My job here is to make sure every 'Chuck D. Production' is handled correctly," laughs Rosado, poking good fun at all the loose cabling in Chuck's editing suite. "I'm like the IS guy here keeping our network of Apples and PCs tied in for our audio, video, and DVD editing needs. There is a cable router downstairs next to where I have about 25,000 of my records, Cds and cassettes archived to where you can find anything instantly [Juice has another 70,000 pieces of vinyl stored in his home.] Chuck is in his room with his two Macs and AirPort card where he's working on the two upcoming P.E. albums. I make sure it's all happening just right for him."

"Juice uses the FW-1884 to combine the elements of old and new equipment in our music without it being a headache," adds Chuck D. "Among everything else he does well, he's really good at keeping things smooth here."

A Nation Of Millions
With the band's constant touring and two new Public Enemy albums in the works, there's plenty to keep Johnny Rosado busy. A master scratcher and DJ, he's equally adept as engineer and producer on the FW-1884 decks, as well. A longtime TASCAM user who cut his studio moves on a M-3700 console and MSR-16 multitrack before "going digital" in 1997, he tried every software control surface available today before picking the FW-1884 to control P.E.'s Cakewalk Sonar recording and editing environment.

"I always have people coming over here to look at it because it's a cool piece of gear. And, I like the fact the FW-1884 has a master fader!" laughs Johnny. "You know? Other controllers don't even have a master fader, so you have to either buy a third-party master fader unit or eat up one of your eight faders to create and assign one. The FW-1884 has a master fader and eight other channel faders, but mainly I love the way its faders feel and the touch and feel of the jog/shuttle wheel. It's also really easy to get around the FW-1884 because it is laid out logically. I've worked on other software controllers where I've said, 'Now why did they put that there? It makes no sense to put that button there.' But, as a recording engineer and producer, the TASCAM controller makes complete sense to me because everything on it is placed right where it needs to be."

Johnny says he favorably compares the sound of the FW-1884's mic preamps to many of his vintage hardware preamps. He recently played some FW-1884-recorded tracks of the band My World for Warner Chappel Publishing vice president Patrick Conseil who told Juice the drum sounds in the song were reminiscent of the Sex Pistols' early recordings.

"If I'm traveling with my laptop and don't need to record a whole band at once, the US-122 and US-428 are perfect for spot recordings. I'm going to pick up one of those for the road, and I'm thinking of adding one or two of the new TASCAM FE-8 Channel Expander packs to the FW-1884 in the studio, too. I must say, especially with all my vintage preamps lying around here, that the stock preamps on the FW-1884 and US-122 really surprise me. And for us to be able to monitor right through the FW-1884 without any latency whatsoever is great."

With all of the wordflow comin' from Mista Chuck D. and Flavor Flav, an engineer/producer like Johnny Juice can really put his FW-1884 to good use as his studio's centerpiece.

"Yeah, everything is a lot faster now with the FW-1884," says Johnny. "My workflow has increased and my efficiency and precision is better. With Public Enemy in the studio, that is paramount."

Recreating The Past With The Future: Public Enemy
On "Gotta Give The Peeps What They Need" from 2002's Revolverlution, Johnny used Chuck D.'s old Portastudio to record a new beat loop that sounded like a sample lifted from an old record. It worked so well that many fans were convinced the two had sampled an old break beat for the new track.

"My Portastudio is so old that I think it came out before 8-tracks and Cadillacs," laughs Chuck D. "It is great for what it did back then and what it still does for us today. I carry it around with me to play cassettes, too. The recording techniques of the past are not at all obsolete just because of the advancement of exactness, or what I call 'digitality', in digital recording today."

In addition to recording two new Public Enemy albums, Chuck D. also brings it to the people with his daily radio shows. He's currently heard on two Air America commentary shows, Unfiltered and Bring The Noise, and has a couple more he's planning to soon unleash on a homogenized American public. Known as much for his radio work and mind-expanding travels on the academic lecture circuits as he is for frontin' Public Enemy, Chuck D. is truly a man of his words.

"My co hosts on Unfiltered are great," says Chuck. "Lizz Winstead is a comedian and Rachel Maddow is a gay/lesbian activist with a doctorate degree in politics from Oxford, so they get their points of view across. I interject my thoughts with them and follow their lead-ins. It's a very good combination and very, very diverse. I don't think you can find another combination on the radio, or anywhere else, quite like it. I'm working on a new show, too, the first real legitimate hip-hop countdown show that will be done like American Bandstand and Casey Kasem's Top 40 Countdown."

"Yeah, in fact, for the countdown show I'm calling myself the 'Dark Dick Clark.' There's also a new radio show I'm developing where I call myself the 'Black Charles Kurault' because I do a lot of traveling. You get great ideas traveling and talking to people. It's all about the honesty, man. In a society that has a bad habit of lying to its peoples, young folks today want the goods delivered to them straight-no-chaser. The usual radio and television shows just want the people to feel good for a few minutes between commercials, but that's not honest."