The Little Multitracker That Could 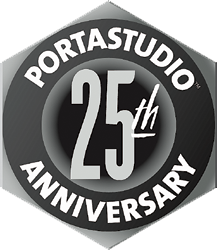 1979? I was halfway to Colorado for the winter and stuck with a broken down '64 VW ragtop Bus in Salina, Utah. That night I pondered a U-turn back to the warm So Cal beaches and thought of investing my saved ski pass money into one of those new Portastudios I'd just heard of. I may have even dreamt of writing the elusive hit song on it that night, but I do know that I paid a mechanic $800 the next morning and shoved off east on I-70, instead, heading up into the Rockies and all that life experience without a tape recorder.

It took me until 1981 to buy a used TASCAM Model 144 Portastudio back in California, and I've never really been quite the same ever since. Suddenly I understood the drummer in my new rock band so much more. I had so much more appreciation for what the keyboard player was up to, and I could finally feel how the bass player was moving the songs along like never before - all because I could now experience each part's intricacies and subtleties at my own pace, at home, and on the headphones with things like "mute" and "solo" and a fader thanks to a used multitrack cassette recorder from TASCAM.

I've always referred to that Portastudio as the most important instrument I ever owned. As it turns out it was worth the wait getting one - I eventually got mine for half it's $899 list price from a rich musician in L.A. He actually couldn't figure out how to use it and so "dumped" it on me, just icing on the cake.

After interviewing dozens of legendary producers, engineers and musicians the past few years about their earliest memories of multitrack recording for the book TASCAM: 30 Years of Recording Evolution, I honestly couldn't wait to tell someone my average TASCAM tale. What was your very first TASCAM multitrack or Portastudio experience like? Like you, I think I'm still enjoying the thrill of that first session in every session I open up today, as if there's always the promise of a Grammy, Clio, Oscar, or TEC Award every time we hit ‘record.' Come to think of it, there is.

In many ways and at all levels of professional and hobbyist music production, aren't we all still trying to recapture that same initial multitrack experience in our work today? It doesn't matter if your "first time" was 25 years ago with a Portastudio or just last month with your first TASCAM US-224 interface and a Mac, it's all good and all the same thing. On this the 25th anniversary of the release of the historic Portastudio, ask any musician, engineer, producer, editor or sound aficionado you know to describe the first time they multitracked with one, and you'd be surprised at what you might hear:

"Wow! The first classic piece of gear for me was the first 4-track Portastudio. That thing at the time allowed me to put so many classic P-Funk song ideas down that I can't even count ‘em. It was such a workhorse and I still have it to this very day. The next biggie for me was the 8-track MIDIStudio 688. I cut lots of stuff that we used on a number of records, such as Praxis' Transmutation and "Zillatron Lord Of The Harvest" for Herbie Hancock's Perfect Beat album, just to name a couple. Thanks for the many years, TASCAM!"
-- Bootsy Collins, bassist/songwriter (Parliament Funk, George Clinton, Herbie Hancock, solo)

"I can't tell you how many projects I've worked on that started from tracks people have done on DA-88s, and before that even on Portastudios."
-- Joe Chiccarelli, Grammy-winning producer/mixer/engineer (Beck, Etta James, U2, Tori Amos)

"Demos in those days were truly demos, not the master-quality work you can do at home today. But people would listen to my demos back then and say, ‘Wow, this sounds great. You have a studio?' I'd tell them, ‘Yes, it's a Portastudio.'"
-- Simon Phillips, producer/drummer/solo artist (Jeff Beck, The Who, Mick Jagger, Stanley Clarke, Jack Bruce, Toto)

The ‘70s: The TASCAM Decade
Think about it. The new Apple II and DOS-based computers were around, disco was new, and they must have talked about the Apollo lunar missions on their coffee breaks and over drinks after work. Lots of culturally iconic events were occuring in the world when TASCAM released the Portastudio on September 22, 1979, at the AES Show in New York's Waldorf Astoria Hotel. Some at the show argued it was "unfair" that the Portastudio was being demonstrated with a Neumann mic that cost almost twice as much as the Model 144, but none could deny how it sounded on playback and what was before them in TASCAM's first booth.

Among so many other engineering firsts for TASCAM and TEAC over the years, the Model 144 Portastudio was the world's first 4-track cassette recorder. Listing at $899, it was a perfect price point and an instant big seller. Each channel sported it's own fader and VU meter; rotary pan, bass, treble, aux send and trim pots; mic/line and tape buttons; four buss selection buttons, a buss monitor with cue and record buttons, and four separate tape cue output knobs. There was even that great pitch knob right next to the transport controls, and if you claim you never experimented with that in your wildest remixes then you're lying.

The release of the first Portastudio was nothing less than the key for a new wave of songwriters and songwriting set free from the confines of the ever-elusive record contract. It was a literal sonic boom in the recording paradigm that resonates with us today more than ever. Just two years before its release, while the Portastudio was being developed, scientists from Stanford and MIT shared the Nobel Prize in physics for "pioneering work in the discovery of a heavy elemental particle of a new kind." Hmm, not unlike the shot heard ‘round the music and recording worlds from the new Portastudio - a new element in songwriting and recording, so to speak, that changed the way music was to be perceived and captured forever.

"I first started with the 3340 and did my first little multitracking thing with a samba beat. I fell in love with it, and then I bought a 144 Portastudio, which was the hippest thing at that time. Then I bought the 244, both which drove me towards becoming a songwriter and getting into engineering. I made all kinds of music with those two machines!"
-- Jim Keltner, drummer/songwriter/engineer (Bob Dylan, John Lennon, George Harrison, Neil Young, Ry Cooder, member Traveling Wilburys)

"The first Portastudio I had was a life-saver. There was a lot of studio experimentation going on in the Bowie years, but by the time we'd get everyone into the studio that song you had was gone out of your mind. Then I got the 144, the black one, and that was the one that got me on a roll. I wrote a song called ‘DJ' on that one. I'd usually wake up around 2 in the morning with a little tidbit of something in my head, so I had an acoustic guitar and an electric and a bass and I'd just jump up out of bed and immediately go 'boom' and get that down! I wrote like eight songs in month on that machine. I also did a little percussive thing where I wanted to create a percussive sound. I did it on the Portastudio with my voice and a little reverb and they actually used that on the record on Station to Station."
-- Carlos Alomar, songwriter/musician/solo artist (David Bowie, John Lennon)

(all quotes excerpted from TASCAM: 30 Years of Recording Evolution by Randy Alberts. Available from Hal Leonard Publishing and online book outlets like Amazon.com)

Randy Alberts is a writer, musician and photographer living in the San Juan Islands. Reach him at audio@pacbell.net