Having defined affordable recording throughout the '70s with a string of product hits, TASCAM's most legendary product line was yet to hatch. The company's ground-breaking work with multitrack cassette recorders was first set forth with the release of the TEAC 124 Syncaset in 1979, and carries on with digital Portastudios to this day. Marketed by TASCAM, the 124 used a Simul-Sync record/playback head to give many musicians their first "multitracking" experience, using cassette head technology sourced in TEAC's sound-on-sound days. Though not a pro unit, the 124 certainly laid the groundwork for what TASCAM was about to unleash on the world. 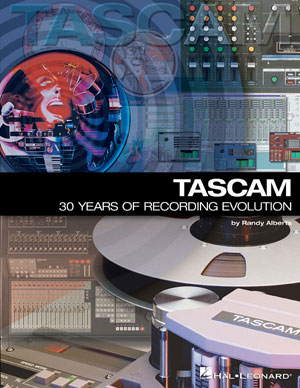 The AES Show in New York's Waldorf Astoria was once again TASCAM's stage on September 22, 1979, when the company introduced the TEAC 144 Portastudio - the world's first 4-track cassette recorder. Initially dubbed the Model 144, the Portastudio was an instant hit with musicians and hailed by magazines as a revolutionary audio product. Musicians could finally record, overdub, EQ, bounce, and mix down multiple tracks all from the foot of their beds, if need be; and engineers marveled at the 144's ability to squeeze four tracks out of an 1/8-inch cassette tape.

Like so many classic "cocktail napkin" stories, the original plans for the 144 were drawn up on the back of a placemat. In fact, David Oren recalls a Culver City restaurant that inspired more than a few TASCAM and TEAC engineers' design sessions.

"All the original concepts of the Portastudio were sketched out on a Sambo's placemat one night," Oren laughs. "In fact, the PMS 264 color in TASCAM's logo back then was that same classic Sambo's orange! Head technology had to get to the point where we could do something like a 144, and advances in TEAC's core materials and shielding were making that possible at the time. We were able to get frequency responses around 40 - 28 kHz, which was a lot better than the 60 - 20 k we were getting with the 80-8 recorder. We were able to do that and get the crosstalk almost nonexistent, and that's when we knew we could move forward and create the Portastudio. Unlike consumer tape heads, the Portastudio heads had four equally spaced tracks and used the same techniques we were perfecting at the time with the 80-8."

"The idea of doing it yourself without going into a recording studio was a far-out concept back then," says Casey Zygmont, a longtime rep selling TASCAM gear since the early 1980s. "That's why the 144 and the 124 were such revolutionary products. They were the first affordable multitracks that you could really do something with without going broke. The Portastudios are what really got TASCAM going."

The Portastudio wasn't met without a few skeptics at first. TASCAM had set up a 144 in a room at the Waldorf during AES to give dealers, reps, and the press a closer look. One rep was playing an acoustic guitar, while another recorded him with an expensive Neumann mic. Apparently, that wasn't a level-enough playing field for some critics.

"The 144 had a retail price of $899, and we had a $1,200 Neumann mic plugged into it," recalls Chuck Prada. "The biggest response we got from that was, ‘That's not fair!' The whole AES show we were trying to tell people that ‘garbage in is garbage out,' but they didn't quite get it at first."

The Portastudio was an all-in-wonder recording solution that sported many features found on the professional recorders and mixers of the day. Each channel in the 4 x 2 mixer had its own fader and pan, bass, treble, trim, aux send, and mic/line controls; also, tracks could be "ping-ponged," and users could overdub and punch record parts for days. The 20-pound Model 144 was a heavyweight when compared to the analog Portastudios of today, but the ability to carry it to gigs and do remote recording with a couple of mics was a blessing to anyone in the late 1970s.