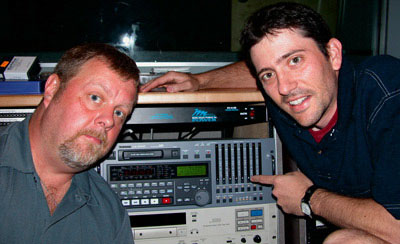 Tape is alive and well! In the busy world of post and media production, TASCAM's venerable line of DA-series DTRS machines are still the reliable workhorses that get the job done.

Gizmo Enterprises, a New York based post-production facility, recently used their DA-98HR and DA-88's on some high-profile gigs. "We just finished production on the DVD Extras for ‘Fahrenheit 911,'" says Gizmo co-owner Brian Mackewich (pictured on left). "We worked with Westside Productions, Michael Moore's production company, on the extras package for the upcoming DVD release. Since we had to provide not only stereo mixes, but also split mixes for any international releases that may come up, we needed eight tracks of audio. So we used the DA-98 HR".

Since the DA-98HR includes multichannel AES/EBU digital I/O, engineer David Glaser (pictured on right) could simply patch his Pro Tools outputs directly into the deck. The DA-98HR can be controlled via serial 9-pin control, or directly from a DTRS remote. Since the deck synchronizes so easily, it can also be used for critical backups, with audio fidelity up to 24-bit/192kHz. In high-resolution mode, the DA-98HR can do 8 tracks of 48kHz, 4 tracks of 96kHz and 2 tracks of 192kHz.

"We also used it on the Evil Knievel World Premiere for promos and Regal Cinemas in-theater promotions," continues Mackewich. "We did various HD (High Definition) pieces for TNT productions that were stereo, 6 channel surround, and Dolby Surround matrix mixes. Once again, we needed to print multichannel stems, so the DA-98HR was perfect for the job."

With a 1hour and 48-minute recording time, its no wonder the DA-98HR still has it's place in this hard-disk world. Additional features include built in synchronization for SMPTE, MIDI and 9-pin sync, 20hH-20kHz frequency range, confidence monitoring for layback and live recording and Word Sync In/Out/Thru. The system is expandable up to 16 machines, or 128 tracks total.

"We've had DA-88s for many years, and they're still running all the time," Mackewich noted. "A lot of material still comes in on DA-88, because people are still editing in Avid's that are 16-bit. We also have to deliver material in that format, so we print to the 88's quite often. However, the 24-bit depth is very important because new Avid's are now 24bit. That means that OMF's are 24-bit capable, so when we do split track layoffs we have to do it at high resolution."

Gizmo also used 98's for multitrack layoffs on the DVD series for MTV's "Newlyweds" show - featuring Jessica Simpson and Nick Lachey. "We just completed mixes and split mixes for that DVD release. It's great that you can do stereo, split, or matrix delivery on one machine." Mackewich feels that they will be using their Tascam DA-98HR for many years to come. "It's substantial, doesn't need a separate digital interface and it has a built-in 25-pin Tascam digital I/O. They are solid machines and they sound great. We love them."