GigaStudio Goes Behind the Scenes of ROCKSTAR: INXS

From the producer who brought reality TV 'hits' such as Survivor and The Apprentice, comes Rock Star: INXS which airs Monday night, July 11th on CBS. The show features a worldwide search to find a new lead singer for Australian rock band INXS. 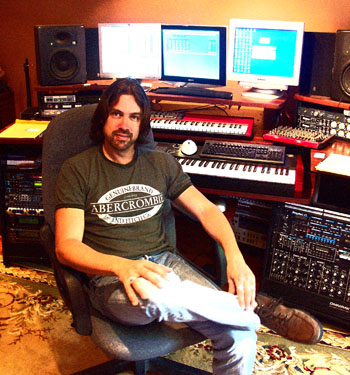 Keyboardist/Composer/Musical Director Paul Mirkovich was tabbed to rework the show's theme song (INXS' "New Sensation") as well as MD the show's live band that will back the competing singers. Prior to ROCKSTAR, Paul served as keyboardist/MD on tours with Cher and Janet Jackson, and scored music for a variety of other TV shows and films.

We caught up with Paul prior to the show's launch in his Los Angeles studio where GigaStudio reigns supreme in all his production work.

How did you get started in the music biz?
I grew up in Los Angeles in an area that had all kinds of great musicians hanging out - the Lukather's, Porcaro's...they all lived in the neighborhood. I've been playing piano since I was 4 years old and the very first job I ever had was as musical director for a production of "Oklahoma" at a local church. And the band in the local church included Mike Porcaro and all these heavy weight session guys that went to the church.

From there, out of high school, I went to the Dick Grove School of Music, which was a pro school where we were taught by Henry Mancini, Lolo Schifrin, Claire Fischer, and folks like that. It's since been closed. It was music conservatory and I met a lot of musicians there. I played a lot around town and did sessions, and got my first call to audition for a tour in 1986 with Jeffery Osborne. And I got the gig. I was like 22 and I'd never been out of L.A. before and all of a sudden I was out with a bunch of folks that'd been touring for years! I went from that to a tour with Cher in 1989 and became her Music Director shortly thereafter, and worked with her about 16 years. I also did stints with Whitesnake and Nelson.

When the whole digital audio world exploded, I got heavily into that and started programming. I've done three tours for Cher where I was MD and programmed all of the audio, as well as a couple of tours with Janet Jackson as MD and programmer and on the recent tour, I put her band together. So as an MD, I've been in charge of every show I've done for the last 15 years or so.

Now with the Rockstar: INXS show for CBS, they needed someone who was experienced as an MD - which I've done on tours and for 5 years on a FOX TV show in the '90s called Comic Strip Live. I'm really comfortable running the show and I'm very meticulous about preparation.

Does this new gig with CBS close the chapter on touring for you?
I don't really want to tour anymore, unless of course, Paul McCartney calls and wanted somebody for a couple of months! But for right now, the production work I'm doing in my studio is great. I'm really focused on the Rockstar show and that will allow me to play great rock 'n' roll with a band and I won't have to leave home.

The show's theme is the INXS song "New Sensation", which was a huge in 1987 - a #1 hit. They wanted a new version that would be a bit updated to set up the show. They sent me all the live tracks from the Wembley Stadium show that INXS did in 1987. I brought it into Nuendo and had about 100 tracks once I added other studio tracks they did after that.

I basically got rid of 98% of what was there and built the new tracks thematically based around the ideas they had in the original but played with a little more aggression. I also sped up the tempo and added loops and other synthesizer sounds that were more contemporary and I changed the bass line, added different drums… I basically started from where it was and made it so it still reminded you of the original but had a lot more energy with more contemporary sounds.

Also, my band is going to record about 15-20 songs to use in the body of the show, and the same band will also be performing live for all the performers. The initial show consists of 15 singers, each doing a classic rock and roll song. The first show we had songs by Nirvana, David Bowie, the Rolling Stones and The Who - some of which had never been done on national TV before by anyone other than the original artist. Right now, I'm doing arrangements for the following week, featuring songs from The Clash, Foo Fighters… It's a great opportunity to show people in American that we can put some real rock and roll back on TV.

The show will run Monday, Tuesday and Wednesday nights through the middle of October. Like the other TV competitions, we will lose one person per week and the one who wins will become the new lead singer of INXS and will write and record with them, go on tour and hopefully be a huge star.

You've been using GigaStudio for quite some time. How do you incorporate it into your work?
I started out with a Sound Chaser system with GigaStudio on it about 5-6 years ago. I was on a 3-year tour with Cher and as the tour progressed, I implemented more virtual instruments, VST instruments and a Giga setup. Mostly what I used it for live was for piano, strings and horns. I didn't get tremendously intricate with multiple setups because by the time I was implementing Giga, the show was already programmed. In the studio, I have one machine that's dedicated to Giga. I use it probably a little bit differently than a lot of the major composers who have like 12 systems and each has a very specialized application. I have one system devoted to Giga and one for Nuendo, which I use with Giga in Rewire. Both machines also run VST instruments and I use that more because most of my work is more pop and rock 'n' roll production.

I have a lot of libraries that I've converted from my Roland 760 libraries from eons ago using the old Chicken Systems translator. I use a lot of the drum libraries, and the newest one I have is the

Larry Seyer Acoustic Drums library which is pretty phenomenal. For any kind of acoustic drums, I think it's just about the best library out there. It's the most playable library, and you can get great grooves that sound like a drummer.

I also have the Garritan string library, which I love. In production work, I use it more as an addition to a lot of the VST's I have. In any production that I do, very rarely is it solely a Giga or VST production. It's usually 30-40% Giga stuff and the rest is all the other palettes that are available in the VST instruments.

On the "New Sensation" theme that I did for the Rockstar show, I'd say there were like 6-7 instruments coming out of Giga and 3-4 things using VST instruments or live instruments. The drum kit I enhanced with a live kit; I used a live bass player which I also enhanced with Giga. Some of the guitar was live and on some I used of the overdrive library from VSL.

As a longtime Giga user can you talk about the leap between the old and the new GS3?
I'm real excited about the GigaStudio 3.10. To my mind, it will make it a lot easier to implement it into live situations given that you can use key switches and/or 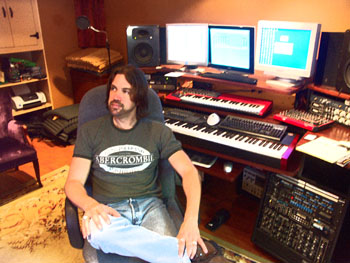 control changes to change programs all in the same stack. I think that's pretty brilliant .I'm looking forward to experimenting more with that.

The other thing about the new GigaStudio that blew my mind was the reverb. The GigaPulse is amazing! It's by far the best reverb of anything I've ever heard. It's the first thing that's superior to a hardware box that I've been around. If you weren't going to upgrade to GS3 for any other reason, that to me would the reason more than anything else. The quality of the reverb and the realism in the pulses is astounding.

The other thing is I find it to be more stable in general. I think the updates have addressed any stability issues. The functionality of it in general, loading patches and search functions have always been amazing, so I think it's just becoming a more mature product. I don't have worries when I use it; I don't think about whether it's going to do the job… I don't recall it ever crashing on me, which I think is fairly remarkable for a software program!

I use it with in ReWire with Nuendo, and I use it with FX Teleport on my other machine. I'm using it in a way that is maybe pushing the envelope a little more than most people would. It would be expected to be a little crazier than if you were going to use it straight in the box and have it coming out of an audio cable. I'm using it coming out of an Ethernet cable and using it in ReWire… I've been told I'm crazy! But even with that, anytime I've had a problem, I've been able to trace it back to a FX teleport problem or a Nuendo problem in communicating with Giga, not a Giga problem by itself.