Musician's Friend caught up with Dave Mustaine prior to hitting the road on the Gigante Tour with Megadeth. He talked about music, family, gear, Starbucks (?!) and how the TASCAM CD-GT1mkII was invaluable for preparing the new band for the tour. Read an excerpt below, and for the interview in its entirety, check out the Musician's Friend site here. 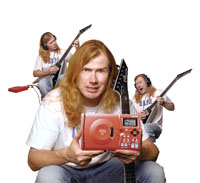 MF: You've also been endorsing the TASCAM CD Trainer. Have you incorporated it into your own practice routine?

DM: Oh, I never use that thing. (Awkward silence) Just kidding! (laughs) We actually have three of those out on the road. We have one for Glen, one for myself, and one for James - the black one is for the bass player - go figure, the guitar players get the red ones and the bass players get the cool colors! I'm gonna have to talk to them (TASCAM) about painting mine black!

I've always been a believer in TEAC and TASCAM products, but I didn't really know how you could put a CD in a deck and listen along to it and how it's going to help you. The cool thing was, the more I toyed around with it, the more it helped me.

When we had tracks from the record and we took them apart, we would just put the ProTools track of just the solo, and I went back and I learned solos off of Peace Sells that I'd been playing wrong for years. And it wasn't that I was off by much, but it was off! And this neat little component helped me play better. And the reviews of our concerts on this last tour were people going like, "****, these guys are rad now, man!" And even some of the journalists said that they weren't really looking forward to coming and seeing us play again, but that they were really impressed with this concert. I directly attribute that to being able to study the tracks and play them right. I know for me, Glen, and James, we wouldn't have been able to pick the parts up as cleanly if we didn't have this piece of gear.

To read the interview in its entirety, check out the Musician's Friend site here.