New York , NY (October 8, 2005): TASCAM Claimed the 2005 TEC Award for Musical Instrument Technology with its GigaStudio 3 software. TEC awards are given annually for Technical Excellence and Creativity in the Pro Audio field. TEC Awards are voted on by the readers of Mix magazine, and include categories for creative achievement as well as product excellence. 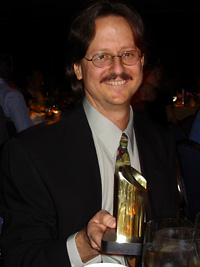 "This award is a testament to the working musicians who use GigaStudio every day," says Jim Van Buskirk (pictured), Chief Engineer for TASCAM's Austin Research Center and one of the main architects behind GigaStudio. "The creative users who push GigaStudio to its limits are the ones who drive us to make a better instrument for everyone."

The award was accepted by Jim Van Buskirk and Jim Bailey, TASCAM Product Development Manager. GigaStudio 3 is the world's premier software sampler, with unlimited polyphony, 96k resolution, ReWire support and the lowest latency of any sampler. GigaStudio boasts the best sample libraries in the world and is featured on award-winning film soundtracks, television series and popular music releases.

TASCAM is the professional audio division of TEAC Corporation and produces the most comprehensive line of audio recorders, mixers and related equipment in the pro audio industry. TASCAM has offices in the U.S., U.K., Canada, Germany, France, Italy, Australia, Japan, Mexico and Latin America . For additional information, contact: