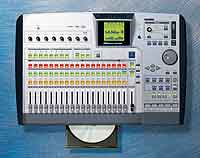 "To many musicians, 24 tracks is more than just a number," says Jim Mack, TASCAM Division Manager. "24 track recording is the standard for major label acts recording in big studios, and never before has it been so affordable for artists recording at home. And with the MIDI sound module, plus mixing and CD burning features of the 2488 means you can produce pro-quality CDs using just the 2488."

The TASCAM 2488 is a 24-track / 24-bit production workstation with 36 mixer channels. 3-band EQ is provided for all 24 channels, plus the eight inputs and tone generator channel. Three aux sends - one for each mixer channel except for the effects return - send to a loop effect with effects like reverb and delay or external devices. Up to eight dynamics processors can be utilized while recording or mixing, and an additional stereo compressor is dedicated to the stereo output. When your song is mixed, the 2488 can master and burn a CD using the built-in CD-RW drive, or transfer your track to a computer using the high-speed USB 2.0 connection.