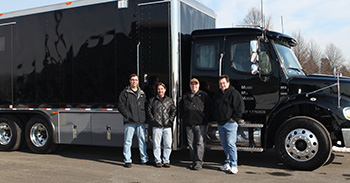 “At Music Mix Mobile (M3), the heart of our trucks is our main clocking system,” said Joel Singer, Chief Engineer and founding partner of Music Mix Mobile. “We need a “Swiss army knife” of clocks – something that is not only stable and accurate, but also has many options for conversion, clock sources, and switchover during clock failure. The CG-2000 has all this – and more.”

“The stability and accuracy of the clock is tremendous. We immediately noticed an improvement in the clarity of the system. Our truck’s control room has always been considered a very accurate imaging system. My engineers commented that it was better with the CG-2000 in place.”

The 12 word clock outputs allowed them to eliminate distribution boxes: “We have eliminated distributed WC from our world, and now directly clock from the CG-2000. We additionally distribute black from the CG-2000 for use in our Dolby 571 E Encoder units. These require a NTSC black signal rather then WC. Dual power supplies built-in without wall warts is a blessing. We connect to two different circuits and eliminate the worry associated with an internal PSU failure.”

“Overall, this unit is a winner.  I will be updating our other trucks with these clocks in the Spring.”